What Is To Blame For The Obesity Epidemic? Just Eat less and Move more. That’s the shallow and often misunderstood nutritional advice that is thrown around to those attempting to find advice on losing weight to get healthier. There’s a problem, despite this advice obesity has increased 300% over the past 6 decades (from 12% in the 60’s to 42% today) First off, we are exercising more than we ever have as a nation. Second, the idea of eat less completely ignores the effects biochemically that specific food has on your body. 2 pounds of carrots has 375 calories and 4 ounces of peanut butter has 667 calories. These foods are going to have drastically different effects on the body biochemically. A multitude of factors play a role in food and its effect on our body. The overall health of our country is declining rapidly. “In 2015-2016, the most recent available data, the national adult obesity rate was 39.6% and the national child obesity rate was 18.5%. Nationwide, obesity has increased by 70% over the last 30 years for adults and by 85% for children” As weight increases, so does the chronic level of inflammation in the entire body. When chronic inflammation rises to an unhealthy level in the body issues such as depression, cancer, diabetes, anxiety, and stress all follow in its footsteps. Maintaining a healthy weight is so much more than a number on the scale, an image in the mirror, or meticulously worrying about calories. It is about preventing chronic disease, being energized throughout the day, sleeping like a baby, and being able to enjoy life without as much chronic pain.

So what’s causing this rapid rise? We are exercising more than ever so let’s put that aside. The ketogenic community sets out to argue that it is refined sugar, grains, and carbohydrates. They argue the blood sugar rollercoaster, high insulin, and nutrient lacking carbohydrates are the ones to blame because they never leave you satiated. The vegan community will argue its all red meat, whole milk, cheese, and bacon that is making every sick and fat. Heart disease and clogged arteries they say. The paleo community argues it is processed food in general whether it’s vegan tortilla chips or fried pork rinds, the body shuts down itss true hunger signals leading to overeating of these foods. The paleo community stands on a diet of entirely whole foods, primarily made up of fruits, vegetables, and meat. The fitness community argues we are just eating too many calories, cut the peanut butter, soda, and steak. Instead, get yourself artificially sweetened zero calorie soda, sugar-free pancake syrup, fat-free cheese, chicken breast over steak, egg whites over whole eggs, low fat milk over whole milk, all in the name of calories. All these communities argue their philosophy is the best, they point to the transformations that occur within all three of these. Well, let’s take a deeper look at the hypothesis of these diets, which might be the most correct.

At the simiplest terms, let’s focus on calorie content on the average american. Where is all of our calories coming from? I previously noted that over 70% of the average Americans’ diet is processed foods. The majority of processed foods have three ingredients that make up just about every single one. Refined grains, refined sugar, and refined vegetable oil. Ingredients such as flour, corn, sugar, high fructose corn syrup, soybean oil, cottonseed oil, sunflower oil, and canola oil. It’s what makes up crackers, chips, cookies, cereals, cupcakes, donuts, and candy bars. Below is the first figure that displays the prevalence of sugar & obesity in America today. It’s clear that while sugar may have been correctly blamed up until the 2000s, since then sugar consumption has plummeted likely because of the development of artificially sweetened beverages and sauces. 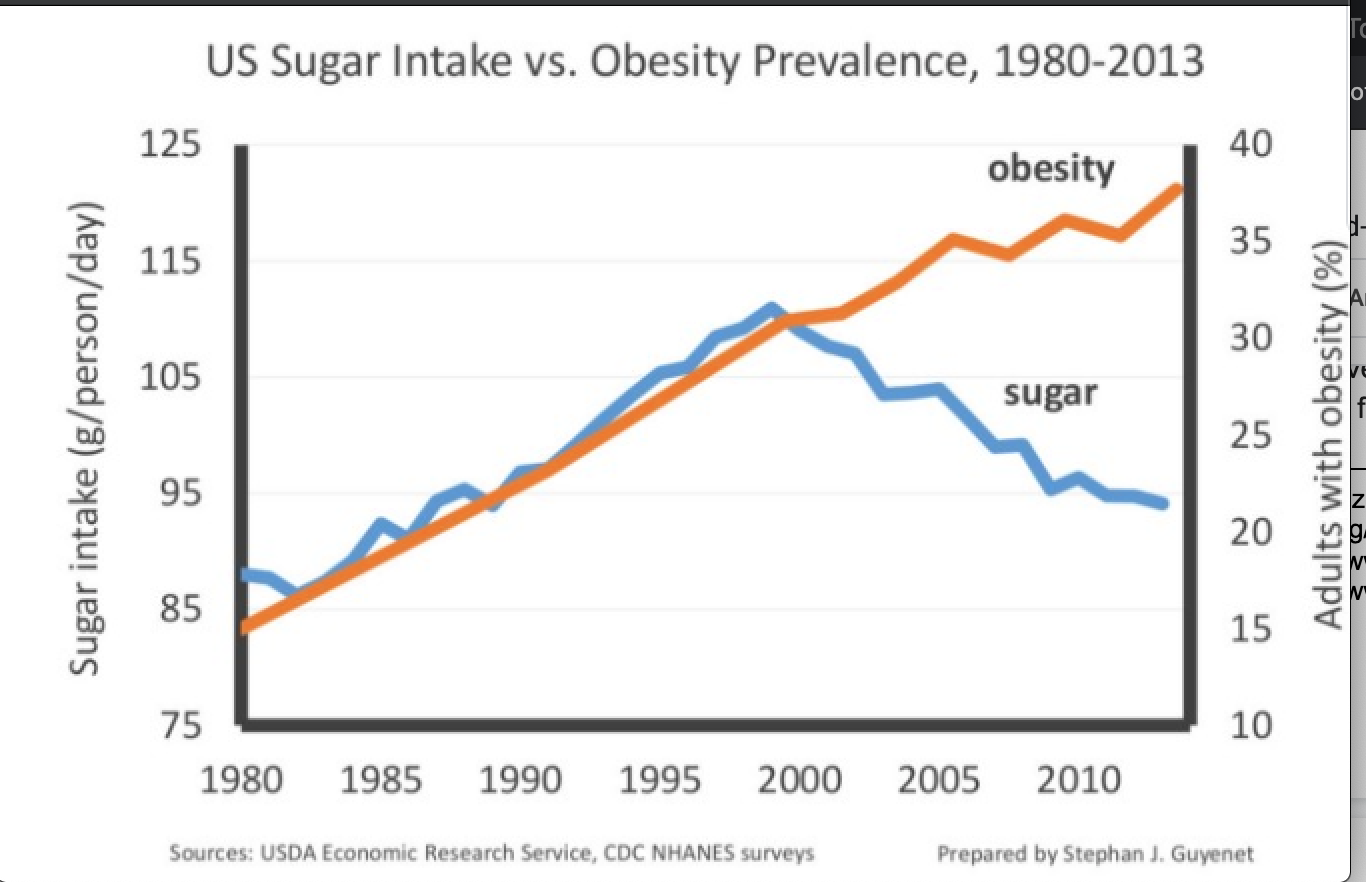 Next let’s examine grain consumption, also known as refined carbohydrates. Below, the illustration clearly shows a decline in grain consumption around the year 2000. Also, this graph proves to us that red meat consumption is down, animal fats are dropping, and all dairy consumption. It’s fair to say that you cannot correlate animal products with obesity when one is dropping and the other skyrocketing. If you did not notice, there is one caloric food group that is on the up and up. Vegetable oil. 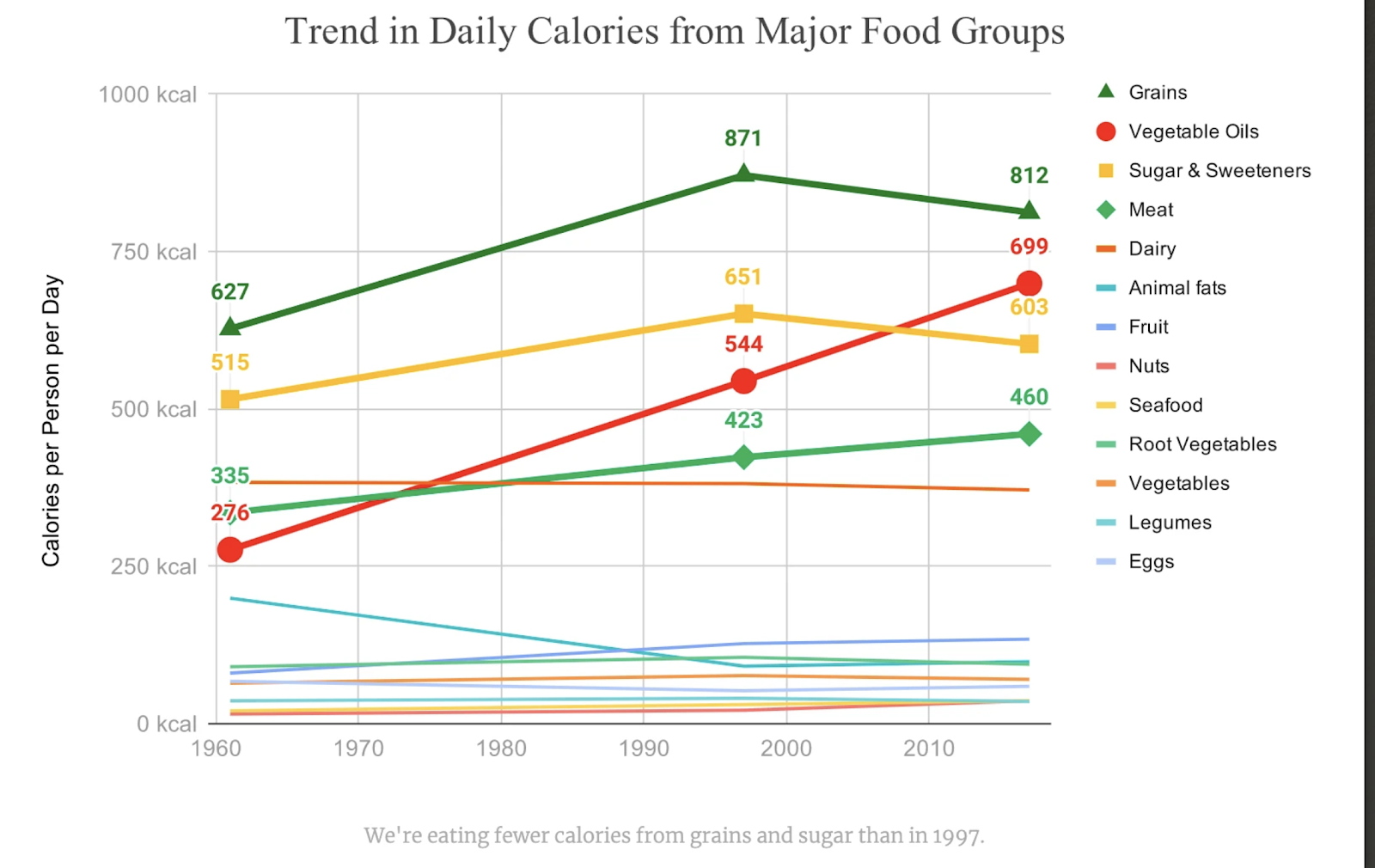 The introduction of vegetable oils in the 1960’s was pushed by a hypothesis that said saturated fats are the root cause of illness. This movement also attempted to push that cholesterol was bad for you, eggs, bacon, steak, and whole milk and making your body sick, disease ridden, and turning you fat. While this narrative is still being successfully pushed into the minds of those who have not spent much time researching or studying up to date nutritional science, people like Paul Saladino and Mikheila Peterson have thrived in their health living off only animal foods, primarily red meat, water, salt, and some honey. Paul reversed his once horrible eczema that he had, even on a vegan diet. Peterson reversed depression, arthritis, inflammation, and began to be able to live again. The science of food intolerances, anti-nutrients in plant foods, and the carnivore diet is a discussion for another day. 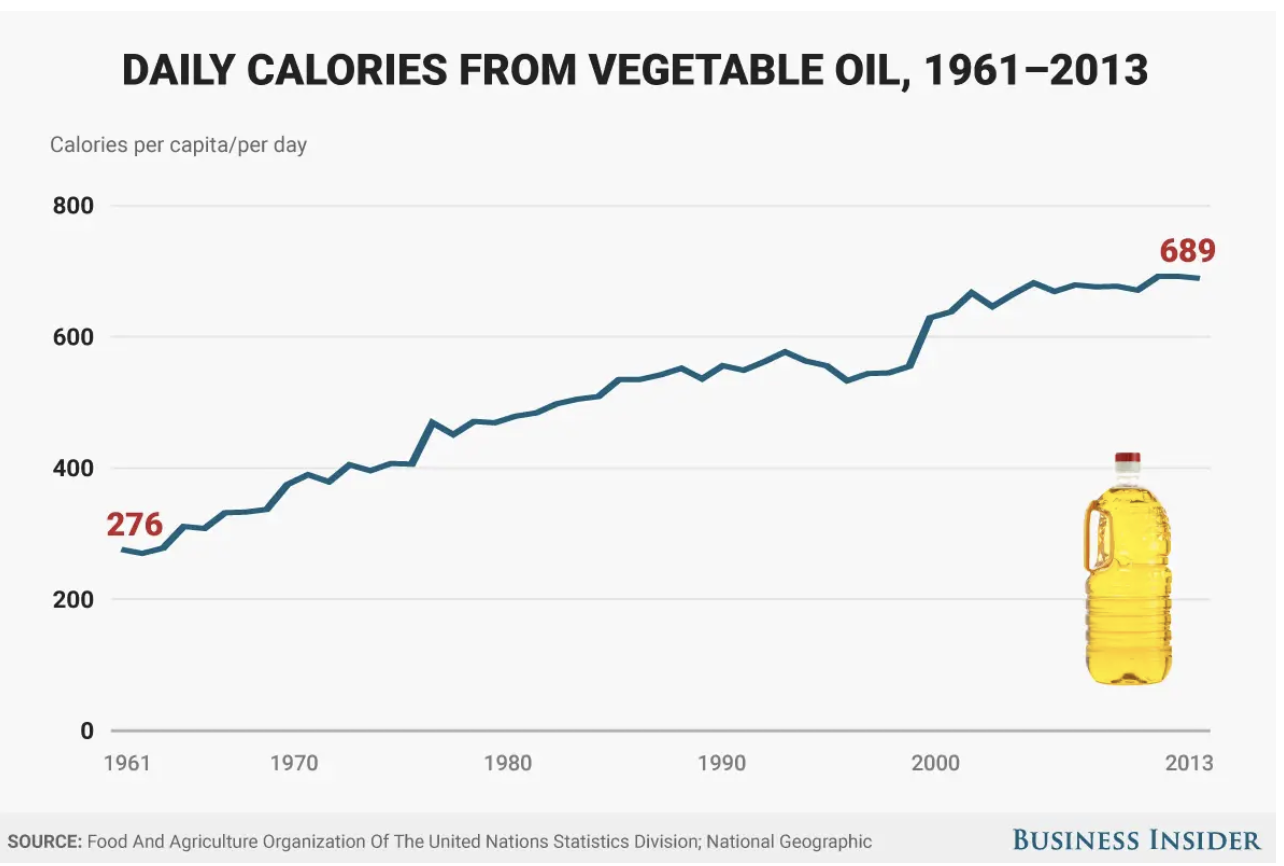 As nutritional science has furthered it’s research, the carbohydrate-insulin hypothesis has become less and less credible and the high consumption of omega 6 polyunsaturated fatty acids have become a greater issue. A recent study revealed the weight gain that is induced from a high consumption of these oils. Forget gluten-free, vegetable oil-free is even more difficult! The majority of every packaged food has one of these pro-inflammatory oils in them regardless whether its vegan, gluten free, plant based, etc. You’ll find vegetable oils in everything from potato chips, crackers, cookies, muffins, sauces, cereal, plant-based foods, and even hummus!

Conclusion – Don’t blame sugar (alone) or fat (alone). Blame the combination of both in one food. So many people today feel as though they must take a stance on whether it is sugar or fat that is fueling our health crisis in the United states. Sadly, we have two extreme dietary philosophies (low carb vs low fat) fighting in their ivory towers over why their stance is so much better leaving millions of people dazed and confused only to go back to eating a standard American diet which is the worst of all. Just take a moment and consider this, people are not becoming overweight and sick eating too many bananas or apples (pure sugar). On the contrary, people are not becoming overweight and sick by eating too many avocados or macadamia nuts (pure fat). I’ll even go as far as saying you cannot blame refined sugar or fat alone. I haven’t seen anyone spooning down table sugar or drinking soybean oil on it’s own. It’s an addiction found in the combination of those two things. Nearly all processed food includes at least two of the three ingredients (refined sugar, refined flour, or processed fats). Donuts, chips, cookies, cereals, baked goods, ice cream, pizza, etc. On the contrary, whole unprocessed foods are never high in the combination of carbohydrates and fats. Animal foods are high in protein & fat, they are awfully difficult to overeat. Fruits and vegetables are high in carbohydrates and low in fat, they too are extremely difficult to eat. Don’t blame one macronutrient or the other, blame the combination of them in processed foods.